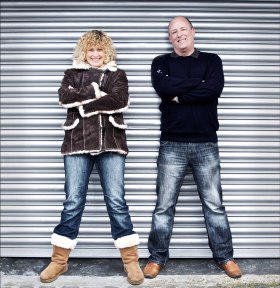 Thank you for stopping by....Well, what can I say?.... I was definitely born with dancing in my genes....

My Grandmother, Sophia Douris, was a very keen dancer. Born in Dumbarton she danced on many a night at Glasgow's Locarno Ballroom.  She once told me that she used to stand in a dancers booth, situated around the side of the dance floor and people would pay to dance with her, she was a fabulous dancer.  Full of grace and sophistication, on and off the dance floor.

My Mum & Dad, Monika & Jim, were also very keen dancers.  In their younger days they won many competitions in Jive & the Twist.  Over the years, they travelled all over the U.K. as dance champions of a touring dance team.

I started dancing at the age of 4 and have tried and enjoyed, many different styles of dance. Highland, Tap, Jazz, Two Step, Nightclub Two Step, West Coast Swing, Lindy Hop, Contemporary, Sequence, Flamenco, Salsa and not to mention Scottish Country Dance, to name but a few. My favourite dance styles however, are Ballroom, Latin American, Linedancing and Modern Jive.

In 1977, I started training in Ballroom & Latin American Dancing with Chic McDonald, Elizabeth Keenan and Kathleen Brown at The 4M's Dance Studio in Wolsley Street, Dundee. In 1981, Chic and Kathleen decided to emigrate to America, where they continued to teach dance, alongside Chic's World Champion Son and World Champion Grandson.... Brian and Gary MacDonald. Chic (who in my opinion was One of the Greats!) was exceptionally proud of his family's dancing achievements. Not only is his grandson Gary a world champion but he has also helped choreograph routines for the film "Shall We Dance," while also appearing in the film, as the dance partner of Paulina, the dance instructor character, (played by J Lo). While Chic and Kathleen jet setted off to the U.S of A.  Liz stayed behind and asked her brother Andrew, myself and my then dance partner Lee to train as dance instructors while also helping her to run the dance studio in the process.

It was a very proud moment the day I passed my teaching exam for Ballroom.  On the big day, examiner Harry Rollins (another one of the greats!) awarded me with a Highly Commended Recommendation. All thanks to Liz for her excellent teacher training!! At age 19, I was now a professional dance instructor with letters after my name: Elaine Douris U.K.A. P.T.D. B.B.  Wow!!  What a feeling, I was on top of the world!!
While teaching at the 4M's I also had the pleasure of helping Liz with the training of my wee brother and youngest sister to dance competitively.  They partnered each other and it wasn't long before they won 1st place, achieving the status of Scottish Ballroom and Latin Champions for their age group. Not only was I proud of my "wee" brother and sister's achievement but I was also proud of the fact that I had helped them achieve their dancing goal!  I continued teaching at the 4M's until 1986 when unfortunately, work commitments had to take priority.
There was no question that I would continue to dance socially, while still offering private tuition when I could.  Then in 1996, when my son Cavan was 4 years old, I decided to start teaching Linedance.  Well...One class led to another and before I knew it I was teaching 16 classes a week and still managed to find time to choreograph a few linedances. One of my dances "Lovestruck Fool" which was choreographed to a Brady Seals song called "Love You Too Much" became so popular that it was included on a compilation C.D. "Linedance Fever 9"

I also ran many charity dances, social events and workshops, inviting many world class champions & choreographers such as Pedro Machado, Brian Barakauskas, Peter Metelnick, Judy McDonald, Hill Billy Rick, John Robinson, Steven Sunter and "Michael John" Collins (My now Husband) to name but a few, to come along and host some of the events.

In July of 2001, I was introduced to Modern Jive. Partner dancing that was easy to master for the absolute beginner...wow!!  It was like a breath of fresh air!! By Jan 2002 I was travelling down to London to audition to become a Ceroc Instructor and over the next 18 months, and many more visits to London, I completed my training.

I continue to teach Modern Jive and PopLaRoc which is a form of Linedance with more of a Funky, Latin / Pop feel to it but there were also many requests for me to start teaching regular, beginners classes in Ballroom and Latin American dancing again.  So please don't forget to check out the "Learn To Dance" page regularly for updates of new course dates and times.

Having a dance background already and having also qualified as a sports coach, (many years previously, in 1987) I just knew I had to get involved in the new Dance Fitness Craze - ZUMBA.  So in 2010, I qualified as the 1st Zumba instructor in the Dundee area offering people the opportunity to experience the Zumba Party Atmosphere for the 1st time, here in Dundee. We are pleased to say that we are still going strong after all these years and many of the original followers are still with us ! Thank you ladies and gents for all your fantastic support!

In July 2013, Mike and I both qualified as FitSteps instructors. We both felt excited and extremely privileged to have the opportunity to train with (Strictly Stars) Ian Waite and Natalie Lowe and qualify as Fitsteps Pioneer Instructors. We introduced this amazing new fitness class to Dundee in August 2013 and our class members still love it to this day.

Well................As you can probably tell by now, I simply live and breathe dancing and honestly, can't imagine, not having it as part of my everyday life!! I truly hope you enjoy your dancing as much as I do!!

Please take a look around the site and if you have time, drop me a line and say hello.

I'm looking forward to hearing from you!!

Hi my name is Mike.

I am the (better looking) other half of "Team Collins". As you can see from my comment, I am the joker in the class. I will always be on the lookout to have some fun with a customer and try not to take life too seriously :)

Born and raised in the Blackpool area, I started my 'showbiz' career in my late teens with a comedy act in Blackpool hotels. My parents eventually bought their own hotel and I was responsible for much of the entertainment there whilst also taking the act to other hotels in the area.

Whilst always trying to add something different to the act, I happened to introduce a magic trick which I had seen on TV. However, I added a slight twist to things and it went down a storm. Very soon I was hooked on learning more and I very soon joined the prestigious Blackpool Magician's Club who are responsible for holding the world's biggest magic convention every year. It was an honour to be accepted as a member and within one year I had become 'Mentalist Of The Year' beating some extremely well experienced guys in the process and then managing to hold on to the trophy the following year and winning 'Best Close Up Card Trick' for the year also! A trip to Las Vegas followed with the club and many of its members...a trip I will never forget. To say it was magic would be an understatement. However, things were about to change as I discovered another form of entertainment......

My dancing career started quite late in the early part of 1996 when I started attending classes in Blackpool. I loved it ! Within 12 months I had started my own class teaching and I became a qualified dance instructor with the U.K.A. and also with the B.W.D.A.  I choreographed several routines that became known worldwide and on January 1st 1999 just before setting off to London where I was to be interviewed on Radio, I received a fax (remember those ?) telling me I had reached Number 1 in the popularity chart for one of my routines. Great feeling and I still see videos of the routine being danced to this day even in Japan, Sweden, Denmark and of course in the UK.

A few more of my choreographed routines were to become widely popular and as a result I was asked to appear at many events around the country. One such event was organised by a dancer called Elaine (sounds familiar?) who I had met, whilst we were both at a dance venue in Lytham (next to Blackpool). A few months after our initial meeting she rang me to ask if I would appear at one of her events in Dundee. Well, the rest is history......

We eventually teamed up permanently, tying the knot in 2011, working together as a team to bring you our style of teaching and fun. I qualified alongside Elaine in 2013 as a FitSteps instructor but nowadays leave the teaching to Elaine and concentrate more on the admin and marketing side of things, along with helping the odd time with the many routines that may require a little of my choreography input. My teaching continues however in the Ballroom & Latin Courses, where I assist Elaine in being that extra voice and pair of eyes, spotting the little mistakes (variations !) people might make and helping to put them right.

I can honestly say I love doing what I do and wouldn't swap it for the world. When we have time off, to recharge Elaine's batteries, we honestly miss you all, while we're away. You may not believe it but it's absolutely true!  Yes I'm a joker and prankster most of the time but I can speak for both of us when I say it's a privilege to do what we do, so THANK YOU ALL so much...We couldn't do it without you!